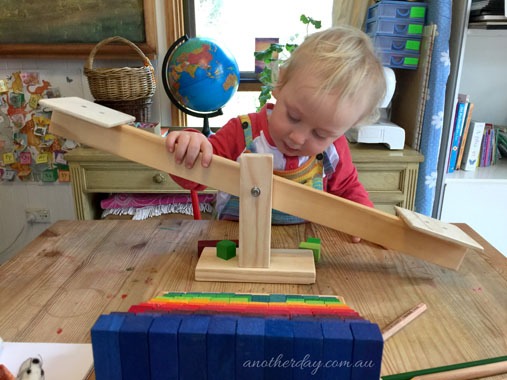 I’m not going to pretend at all like I understand even an iota of the depth to the ‘Whole to Parts’ theory with Waldorf Education. I know it permeates so much of how they teach and it’s one of the things that I love about Waldorf Education – the ‘wholeness’ to the way lessons and topics are approached.

My basic understanding is that it focus’ on that concept of ‘wholeness’ that the children come here with. In a sample of her Maths curriculum, Melisa Nielson (Waldorf Essentials) talks about how until around age 7, the child sees (as an example) the family as a ‘whole’ unit – not Mum and Dad as separate, but the family as a ‘whole’. I think it’s also about educating the ‘whole child’ and representing our ‘wholeness’ as such. When I was reading some information online, I found a few small sections in various articles about the topic. A piece by Enki spoke about the spiritual wholeness and rather than representing lots of collected bits – focussing on the wholeness of the topic/subject before breaking the experience down into parts. Another article by Waldorf Resources spoke about the wholeness in a spiritual way, with the physical and etheric body companionship. It really is a topic I would like to research more and understand, well – more ‘wholly’ I guess! 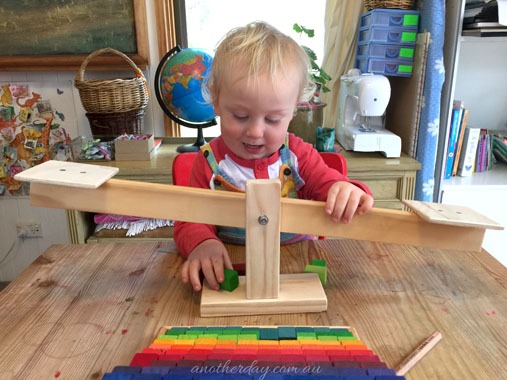 One of the most common places people are familiar with the ‘whole to parts’ concept in Waldorf Education is in the way maths is taught. It is my understanding that it is at the core of much of the way many lessons are taught through the years. At the moment our Social Studies block with Oak Meadow Grade 1 is starting to explore the world. I love how Waldorf education starts ‘where the child is’ for this – in their very own room and home before branching out into the child’s neighbourhood, suburb, town, city, state etc, etc. It is such a beautiful reflection of the way the child comes here – and slowly as they incarnate, they ‘reach out into the world’. 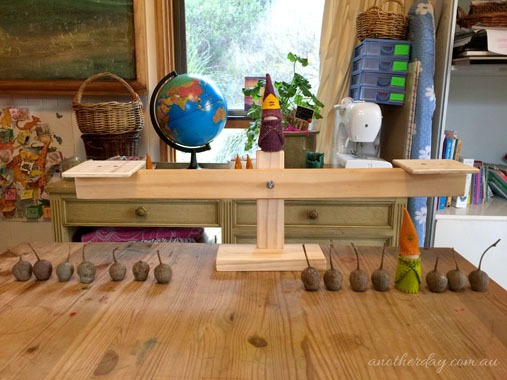 Getting back to ‘whole to parts’ in regards to teaching math, I thought I’d share a little about how this journey started for us today. I remember always being a little confused by the ‘whole to parts’ way Waldorf taught maths. I had a basic understanding of it and probably could have brought it to Chilli ‘well enough’ but it hadn’t really ‘clicked’ inside of me as such. Late last year as I prepared for Grade 1, I was watching some of Eugene Schwartz’s videos and his Grade 1 arithmetic video does a fantastic job of explaining the whole to parts way that Waldorf approaches maths. He gives very clear examples of the children’s work and around the 9 minute mark onward, he focus’ on the concept of whole to parts in a way that just made the lightbulb go on for me. Now as I said, I definitely don’t claim to understand ‘whole to parts’ in a deeper, all around type way, but in regards to the Grade 1 maths, it really just ‘clicked’ when I watched this video. I do honestly believe that the lessons we bring to our children are really so much more ‘alive’ when the lessons themselves, the stories and the concepts really ‘live’ within our own being first. I was deeply appreciative for this video Eugene shares and there was so many wonderful little pointers about the way math is brought to the child in Waldorf Education that I picked up from this enriching video. 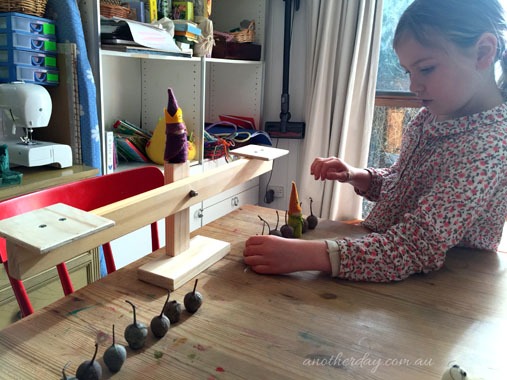 When we ‘met’ all of our maths gnomes earlier in the year, I briefly introduced Great King Equals. He has always been there with all the maths gnomes, however our main math work to date has been with understanding the character of each of the four ‘process’ gnomes. Using the Oak Meadow story in Grade 1, Trimester 2 – we heard a little more about Great King Equals and why he has the special sign on his crown that he does. I told this story to the children as they sat quietly and had their morning snack. Chilli was captivated – it was so beautiful to see. I often find that a way to draw her more deeply into the story is to stop and ask her a question or ask her to recall something form a previous story that ties into this story. This seems to really allow her to live very deeply into the stories as I tell them, and I can see she is busy creating rich and beautiful inner pictures while she listens to the words. For this reason, I have also used very minimal props or puppets in our storytelling for her Grade 1 lessons since we have started with the grades. In the early years, I believe the story puppets and props provide a beautiful tool for the child to live into a story. As the child reaches grade level, I really feel it is important for them to not always be presented with the images, but for them to be allowed the opportunity for their own inner pictures to germinate and blossom within them. 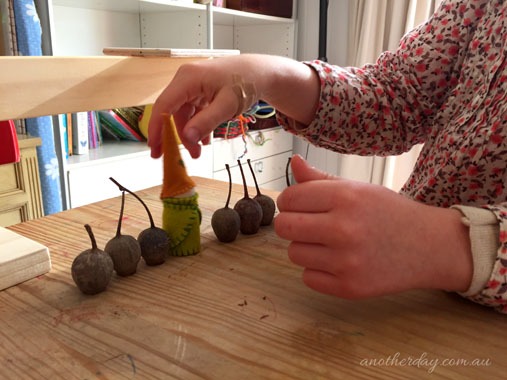 Once I finished telling this story, I stood up and showed Chilli very simply with my hands how Great King Equals always has the same number in each hand. When we were studying our numbers at the beginning of the year, we heard a story suggested in our Earthschooling curriculum – “Two Ways to Count to Ten“. This was a beautiful story that Chilli had really enjoyed. I recalled this story with Chilli and we spoke about how just like there is more than one way to count to ten, there is also more than one way that Great King Equals could have ten in his hand. This seemed to really ‘click’ with Chilli and we moved straight into our lesson of the day. 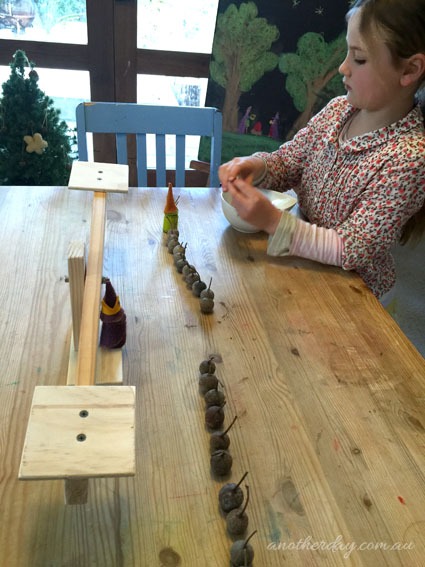 Graham had made for us a fulcrum. I had looked at various ones as well as scales online, but we decided it was just something simple that we needed to demonstrate this ‘equals’ concept. I had hoped that the fulcrum would balance with smaller weights, but we need to work with it a bit more to make that happen – possibly a counter balance? This simple device though worked well for the lesson and concept we needed it to in working with the lesson of ‘equals’. We could tilt the arm down when one ‘hand’ had a certain number in it and then balance the ‘arms’ back out again once the correct number was added to the other ‘hand’. We worked with Great King Equals and the math gnome Plus on this day as well as our collection of gumnuts that we have been using as our manipulatives in maths lessons so far. Chilli interchanges the ‘name’ she gives these gumnuts on certain days to suit the story we have heard. Some days they are nuts the gnomes are helping to collect for the animals through the winter, other days they are gems collected for the King and some days they are cookies that are being shared amongst all the gnomes or marshmallows going into hot chocolates! Today they were rainbow coloured gems that Great King Equals was holding in each hand. 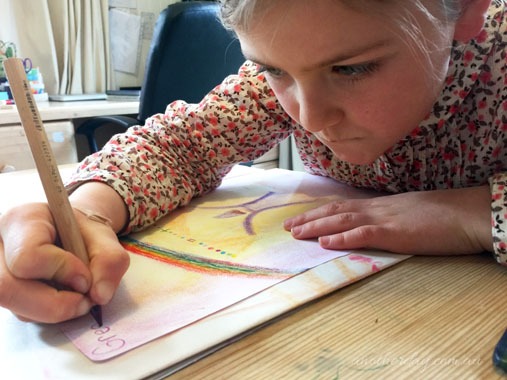 For our first lesson, Chilli drew a picture of Great King Equals with his hands outstretched. I had set the example out with a balancing of the number 7. We then worked out the various other ways we could ‘balance’ 7, with our manipulatives. Great King Equals was standing in the middle of the scale. On one hand he had 7 gems and then in the other hand we needed to make sure he also had 7 gems. I’d set the example with 4 gems on one side, Plus placed after the 4 gems and then 3 more gems (or gumnuts!) following to ‘balance’ the 7 in the other hand. We drew this as our main picture and then Chilli had fun moving Plus up and down the line of 7 gumnuts in Great King Equals’ second hand – exploring one aspect of all the ‘parts’ that could make up 7. We made a little table on the facing page and Chilli delighted in writing and illustrating her findings. It was such a wonderful way to visually have the ‘horizontal format sum’ laid out right in front of her using the gumnuts, Great King Equals followed by a few more gumnuts, the maths gnome Plus and then the remainder gumnuts to make up 7. It was great for Chilli to also see the pattern that emerged in the numbers once she had gone past that ‘mid point’ of the second set of 7. 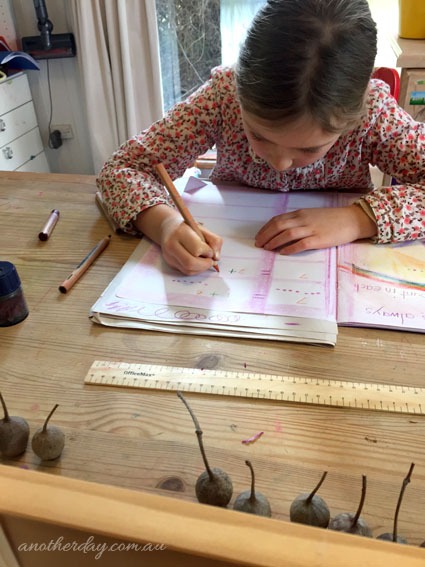 In the afternoon, I told Chilli the story of the temperament friends from Earthschooling’s Sixth Sense math program. I changed the friends from children’s names to be the maths gnomes. Each gnome represents one of the temperaments anyway, so it was a nice way to explore in more detail the character of each gnome. I adjusted the start of the story to tell the tale of what the maths gnomes like to do when Great King Equals gives them the day off. I asked Chilli what she thought they would do and she was wide eyed and intrigued to know just what these hard working gnomes do when they have a free day! The story I told today was the part of the temperaments story that focus’ on the melancholic Plus. After we finished the story, we again went into our lesson room and on the school table, laid out the fulcrum, Great King Equals, Plus and the necessary gumnuts. This time I asked Chilli to choose a number from 10-20 and she chose 18. Again, she delighted in moving Plus back and forth along the line of gumnuts in Great King Equals’ second hand – exploring many different ways that she could also have 18 as well as the patterns that emerged amongst the numbers as she explored them. 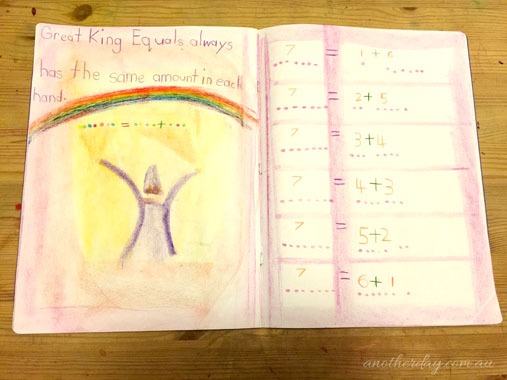 As we progress through the other process’ in exploring the ‘whole to parts’ of maths within horizontal format sums over the coming weeks, I plan to continue on through the temperament stories within the Earthschooling Sixth Sense maths as well as weaving in, perhaps when we branch out into the vertical format – the stories which are also from Sixth Sense maths, about The Fairies of each season. Perhaps I’ll use the stories as is, or perhaps I’ll weave the stories into tales about the favourite season of each math gnome that we have come to know so well. 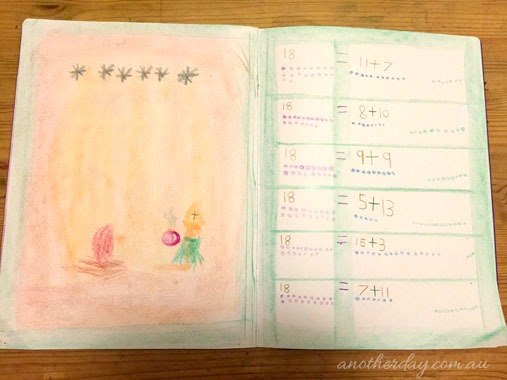 Have you used manipulatives in exploring maths with your children in their homeschool studies? Which manipulatives and creative stories really helped maths to ‘jump up and live’ for your child?

::Please excuse both the terrible quality photos snapped quickly during lesson with my iPhone and the ridiculously messy sewing table in the background, desperately needing a clean up::