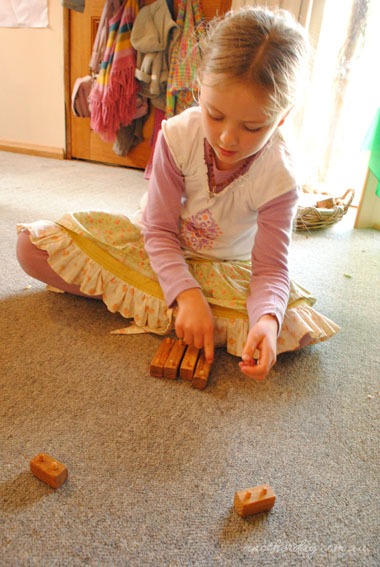 There’s a sweet little verse in the May section of Earthschooling’s Kindergarten curriculum. If you have a Lifetime Membership, or have purchased the May curriculum, you’ll also have access to this verse in the wonderful new month-by-month lesson plans The Bearth Institute is currently releasing. These are making a world of difference to my planning. Even though I may not use the plan exactly as they have laid it out, to have this foundation provided as a springboard for my own planning, is wonderfully valuable. I’m finding it terrific the way they have given each week a seasonally related theme and developed their curriculum around that. In the planning I do, we always have a theme to our weeks. I work our homeschooling rotations, normally in a three week block – with the view of flowing harmoniously along with how each block is received and allowing flexibility if the need arises for a block to be more deeply explored. Having this willingness to bend and flow freely, I feel, is important to offer Chilli the opportunity to fully live into each block and theme as well as the offerings of projects, verses and stories I have put together as her curriculum. Recently I wrote some of my thoughts and views on the Earthschooling Facebook group page in reply to how often a story should change. These words below also relate to the block theme as well as topics, subjects and projects we bring to our children through homeschooling curriculum. Isn’t this the beauty of homeschooling? In a classroom setting, if one or two children were really living so deeply into say, a story – but as a whole the larger part of the classroom seemed ready to move on, then this is what the teacher needs to be directed by. However in the place of homeschooling, we can be guided wholly by the sole needs of our own child/ren.

Just starting this year (K) we are now doing one story a week. I could tell our daughter was ready for that, she would ask when there would be a new story toward the end of each week. In early years though, we would try to keep a story set up for around 3 weeks for a few reasons. Firstly – in early years, (nursery/pre-school ages) it’s most likely that you’re not ‘doing school’ every day, the children most likely only hear the story around 3 times a week. Secondly, I was once told that three weeks is a nice rhythm for story changing to nourish hands, heart and head. (1 week for the hands, 1 for the heart, 1 for the head). I always remember reading that we as parents will be ‘over’ telling a story before our children are ‘over’ hearing it! On that note, I would advise you to watch and be led by your child. Tell the 1 story in as many different ways (as a puppet show, sitting with eye’s closed, as hand gestures, by ‘building’ the story together with play pieces, by your child telling you the story, by drawing the story, by acting the story out together) and let your child eat up every last bit that he or she needs from that story before going onto another one. You will see the signs when your child is ready for a new story, you will get the sense when a story is ‘done’. If you do this for a while, you will, I am sure, notice a natural rhythm emerging of how long a story needs to be kept the same for your child. That being said – some stories have many layers that need to be peeled back, lived into and explored – while others are less complex and are finished in less time. Have your next story ready to go so you’re prepared when the current story is ready to put to sleep, but let them truly ‘live into’ each story fully, without worrying about moving on to a new story for the sake of a scheduled time ideal.

I have, here in this post, digressed from the main topic, so I will go back to topic – promising you that I will very soon, share a post on how I plan and the main considerations in my planning. The task of planning is one of those daunting aspects that can really engulf a homeschooling parent with panic and overwhelm. However, when broken down into manageable pieces, planning really becomes an enjoyable and welcomed experience.

Back to topic – learning odd and even numbers. If you are a homeschooler, you will relate to the fact that the very best homeschooling and learning moments often come from inspired whims rather than well planned out projects and days. There really is something to be said for the whole un-schooling movement! Yesterday during morning circle while we were working with the verse about odd and even numbers, I had an inspired thought that Chilli just so deeply absorbed, loved and ate up with great enthusiasm. I must mention here that Chilli is an older Kindergarten child – so bringing more awareness to the verse in this way is quite appropriate for her. I am this year, weaving in very basic and gentle first grade themes as well as projects and awareness’. This awareness to the verse would not be so appropriate with a nursery or younger K child, however you could also bring this awareness and flow on activity from a verse about odd and even numbers, into a first grade environment. 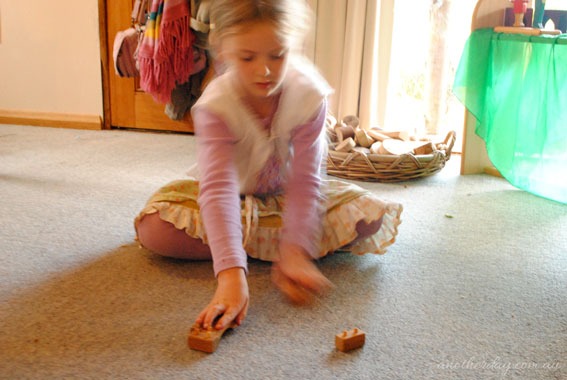 I could see Chilli was a little distant to the verse we were doing – it wasn’t actually ‘meaning’ anything for her but she wanted to understand it. I asked her – Do you know what odd and even numbers are? She shook her head. I looked to my right and there lay the basket of wooden interlocking blocks. I took out two of the 2-prong blocks and laid them out as ‘houses’. I then took out two bridge pieces, because they looked markedly different to the 2-prong pieces. I could have used 3-prong pieces but I wanted a noticeable difference in the two different items. The bridge pieces became our ‘people’. I explained very simply to Chilli that if a number is even, we will be able to put the same amount of ‘people’ into each ‘house’. Even means equal – the same. We went through the verse; 2-4-6-8-10. Each time I added 2 more ‘people’ and Chilli counted the blocks before seeing if they would fit ‘evenly’ into the two houses. Then we started over again and went through the odd numbers 1-3-5-7-9. Each time we tried to fit the ‘people’ evenly into the two ‘houses’. “No – they don’t fit” Chilli would say each time with such enthusiasm. We then did a bit of impromptu practice.  I would take out a handful of ‘people’ without counting them. Chilli would line them up, count them and then try to divide them between the two ‘houses’. Each time announcing if the number she had started with was an odd or even number. The lesson really came ‘alive’ for her and she wanted to go on and on with it. At lunch time, she revelled in the opportunity to explain to Papa how odd and even numbers work and show him the process for figuring out if numbers are odd or even. 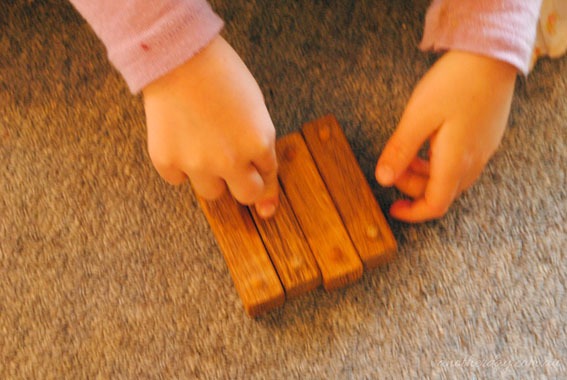 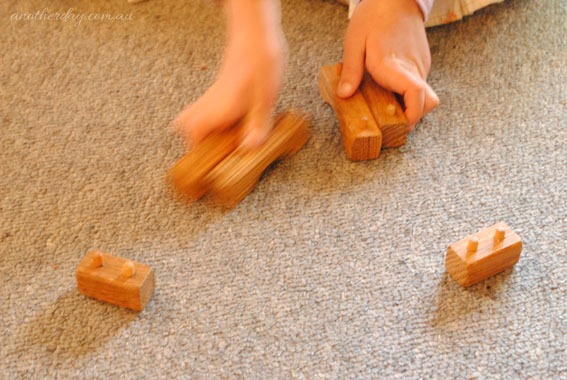 In her curriculum, Kristie talks about ‘Sixth Sense Maths’ – a process by which we really bring math ‘alive’ for children in multi-sense ways and let them live into the math rather than math being some abstract, separate experience from the child. There is an often quoted story about Rudolf Steiner walking into a classroom where children were learning the 2x tables by jumping up stairs in lots of 2’s. The story went on to tell of how Dr. Steiner then proceeded to throw the children roses in lots of 3’s and hence the 3x tables came to be for the children in an alive and relative manner.* I can definitely say that this little game honestly helped the math of odd and even numbers to live so wonderfully and in a ‘real’ way for Chilli. 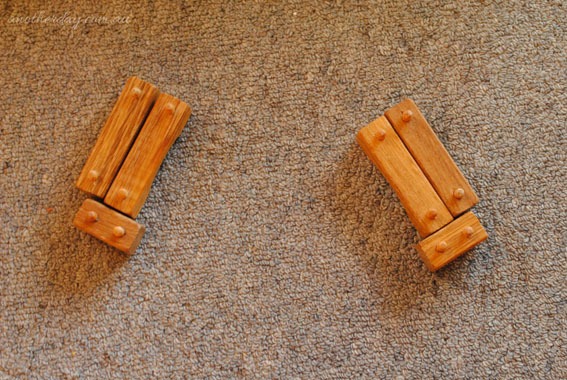 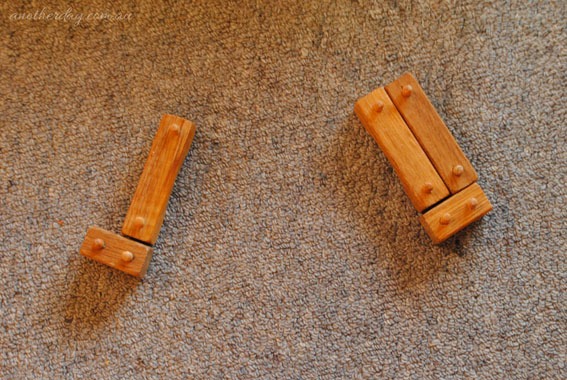 As we packed up this activity, I thought this might also be nice with the multiplication and division numbers – just increasing the number of houses in a relevant manner. That’s definitely a game though for next year and a truer first grade curriculum. If you don’t have the wooden interlocking blocks, you could use any manner of objects for this game. Just choose 2 identical pieces for the ‘houses’ and use a different piece with multiple same’s for your ‘people’. Even two little rocks and a bundle of twigs would work perfectly fine for this process.

I hope you enjoy this little inspired game that came from our homeschooling journey, and that it might add some value to your working with odd and even numbers. Tell me – have you had something impromptu in your homeschooling this week that has had a wonderfully enlivening effect on your child’s learning?