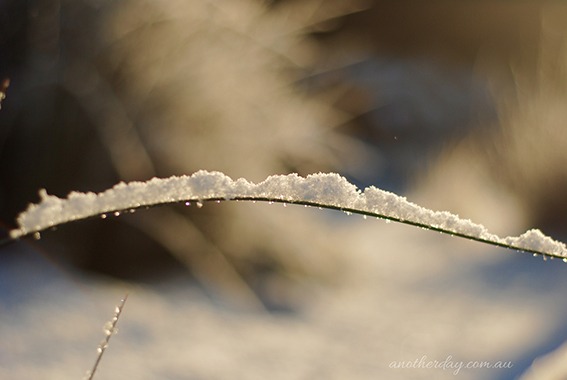 In the stillness of our sleeping, Winter home – I quietly climbed out of bed after feeding and resettling Marlin in the wee hours of the morning. I noticed it was 5am and thought to myself “I wonder if it did indeed snow through the night?” Peeking out the kitchen window into the darkness of the early morning, I delighted to see that the ground was not only white, but a flurry of beautiful white flakes was falling gently from the sky. I had to remind myself I wasn’t dreaming, I was in fact awake, standing in our kitchen – looking out to our front lawn! 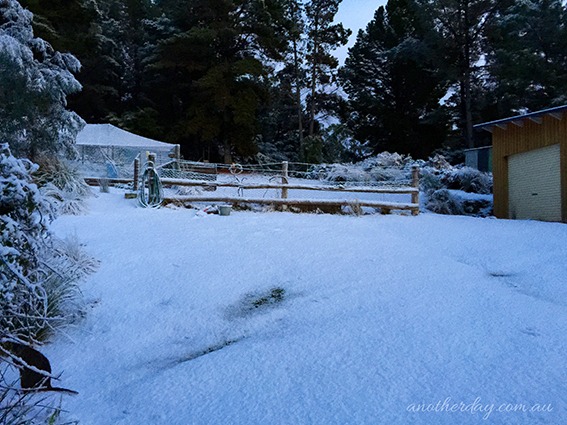 I crept in and tapped Chilli on her shoulder “Chilli, it’s snowing” I whispered… Nothing… It took me three attempts before she stirred and heard me, at which point she was immediately out of bed, running for her snow suit – if only she was that quick to wake up and spring into action every morning! Papa groaned and slowly plodded out of bed. We all watched for a few minutes from the kitchen window before I thought that I better wake Marlin – Chilli was already half way into her snowsuit! Marlin also groaned, rolled over, buried himself into the pillow and said “Boo-a”. When I tried to pick him up and tell him it was snowing he again buried himself into the pillow and growled at me! 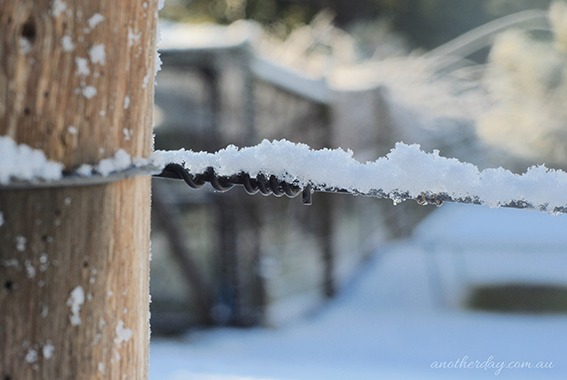 5 minutes later we were all snow wear clad, standing on our front lawn in utter disbelief with powdery white flakes falling on our nose and eyelashes! I may just have even heard Julie Andrews singing softly somewhere off in the distance – it really was that magical! 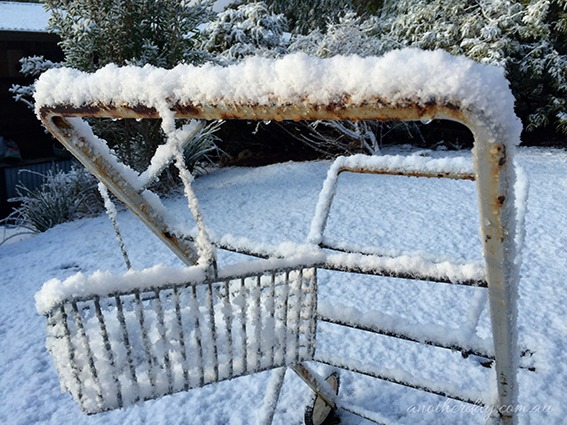 When we heard the forecast reports of possible low level snow in Hobart and the cashier at Salamanca Fresh told me the other day that 80% of Tasmania would be covered in snow on Monday, I really didn’t think it would happen at our 70 metre elevation home. It is though a Blue Moon after all, so what better time for it to snow for the first time in 30 years at sea level upon our little island home! 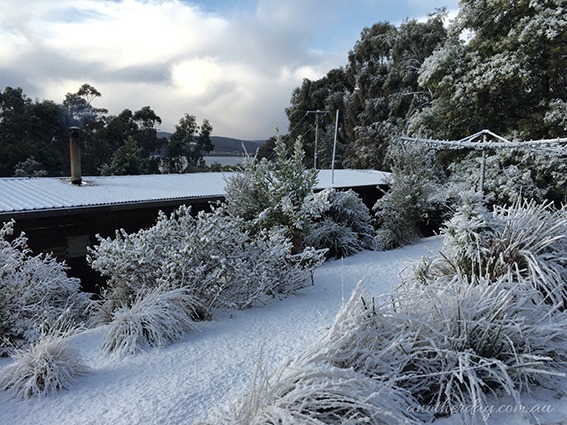 We awoke to snowflakes dancing out of the sky and quite a nice covering all around – on the ground, down the stairs, hanging heavy in the trees, covering the food gardens and all over the clothes line. After a few hours or so in the before dawn snow, we came in for some breakfast and sat at the window – eating bacon and eggs, drinking hot chocolate, while watching more snowflakes dance down from the sky. The snowfall during breakfast thickened up the blanket covering Mother Earth even more and the morning was filled with many a snowy adventure; exploring, marvelling at, eating (the snow!), playing amongst and collecting a tin full to keep in the freezer for taffy making! We caught snowflakes on a dark woollen sock and marvelled at the shapes we could see with even just our regular magnifying glass. This perfectly complimented our recent science studies looking at the individual design of each snowflake. At around 10am Father Sun had climbed far enough up his daily winter ladder to start causing the snow to drip from the treetops. The golden glow he cast over the white, snowy world as he rose out of bed and started his daily climb across the sky only further served to add another magical dimension to our surreal, dreamy morning. By noon there was nothing more than the odd patch left lying around our property, leaving us to remember back and question “had it all just been a very vivid dream?” The children spent the late afternoon playing by the window, sitting in a little fort bed they made and watching out to the weather chanting “come on snow – come down low!” They had Papa checking the BoM, hoping and praying that he’d say there was a possibility of the snow coming again through the night. But alas, the snow clouds were gone and our winter wonderland was not going to revisit through the night. We went to bed that night – early, with full hearts and memories that surely will last a lifetime – snow at sea level in our little island home – pure magic! Needless to say, it was a school free day yesterday, “just like Martin and Sylvia” Chilli told me “A Snow Day!” 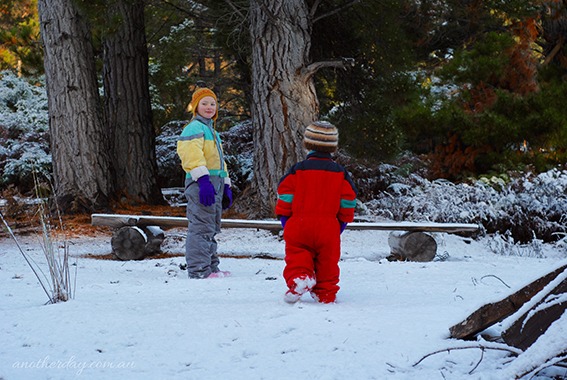 If you haven’t been overloaded with 2015 #snowbart phenomenon photos as yet, then I invite you now to come on a little journey through the gardens of our cottage home and all our #snow fun here in #southerntasmania on that beautiful, magical morning we’ll all, always remember so fondly. (NB: The first few images from 5am were taken on an iPhone, which doesn’t do the best job of handling low light, so please excuse the grainy, black and white early morning pictures which are the first handful of images in the slider below.)

(Please click the first thumbnail below to enable the slider with image captions, telling the story of our Snowy Day)

There has been a problem with your Instagram Feed.
Error: No posts found.