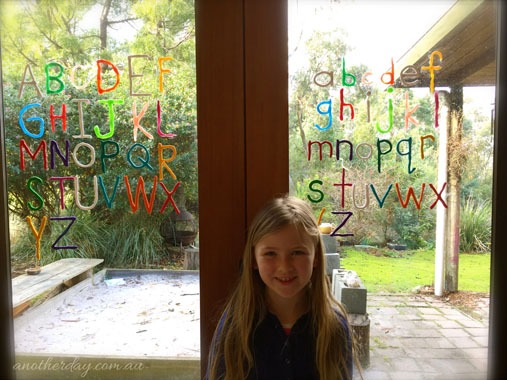 There are many different ways to ‘bring the alphabet’ to the child, and even amongst the Waldorf modality – it is done in numerous and varied ways. There is also many differing views on the stories and creative ways behind how the vowels are brought to the child. 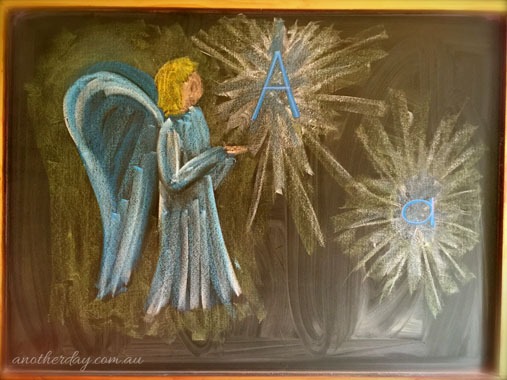 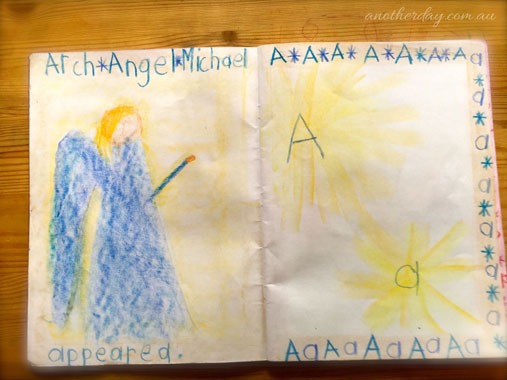 Here is how we experienced the vowels in our alphabet journey. We journeyed through the letters in alphabetical order, omitting the vowels. As we progressed through our Alphabet main lesson book (MLB) we would leave the vowel pages blank and as we modelled each letter of the alphabet to stick to our ‘alphabet window’ we would leave the spaces where special ‘Angel Letters’ were to later come. The anticipation within Chilli of these ‘special letters’ was beautiful. As we completed all our consonants – we journeyed through the vowels. I blended many different programs into our ‘experience’ of these letters. 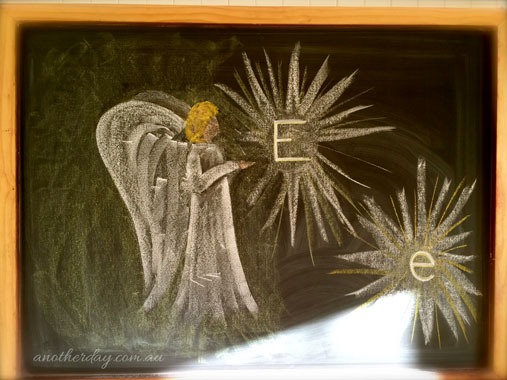 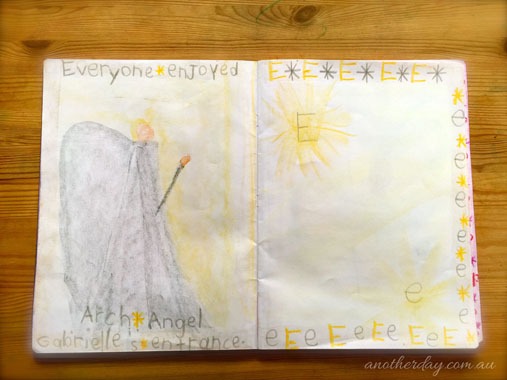 The ‘foundation’ for our vowel journey was taken from the Waldorf Essentials Grade 1 curriculum. The first time I read the way the vowels were brought to the child in this program I just loved it and knew it was perfect for Chilli. I know there is much written by many a Waldorf teacher about why they believe the Angels are not the best way to bring the vowels to children, however for us, this just felt like the perfect and right way to experience the vowels. We are using a ‘container story’ of a family journeying through the year and the Grade 1 lessons. The little girl in our story is called ‘Anna’. Great King Equals met Anna in the Gnomes cave and each of the Math Gnomes had a key for Anna. Great King Equals presented his key first as he explained to Anna what would happen. There were 5 golden keys and a door on the wall of the cave just behind where Great King Equals’ throne sat. Anna couldn’t believe that she had never seen this door before, she’d been working so often in this cave with the math gnomes – but never before had she noticed this door in the wall of the cave. 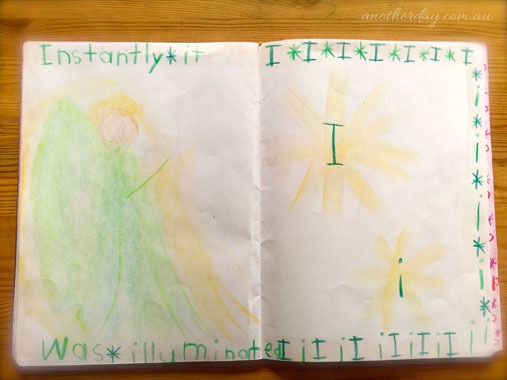 The Waldorf Essentials program brings together the revision of the Roman Numerals 1-5 in association with the keys and which lock they fit into. In turn each gnome came forward over the duration of our vowel journey and presented Anna with a key which fit one of the locks. The ‘door’ to reading was slowly unlocked. 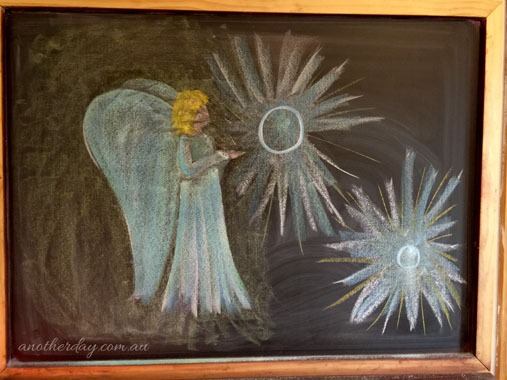 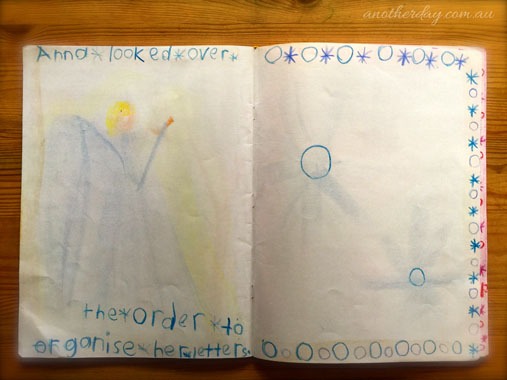 With the turning of each lock, an Arch Angel appears. Each angel presents to Anna the letter they are the ‘keeper’ of and the sounds associated with that letter – the long and short vowel sounds as well as the name of the letter. As the angel almost ‘sings’ the sounds of each vowel – the angel was doing the Eurythmy gesture for each vowel. We would be standing and also did this gesture as we made the various sounds associated with each letter. We brought attention to how the letter felt as we made the various sounds and where in our body the sound was coming from. We also looked at each others mouths as we made the various sounds, noticing the shape of the mouth and the position of the tongue. We would also try to make the sound with an opposite mouth and tongue position. As an example, if the shape of the mouth is quite a tight contracted gesture, we would try to make the sound with our mouth open wide like another letter. It was a lot of fun and a really nice way to bring mindfulness to how the sounds are formed in the mouth. Each angel has a story for Anna which was the story from each vowel given in the Waldorf Essentials Grade 1 program. 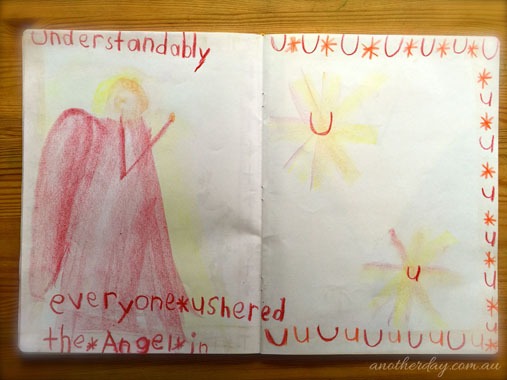 We re-jigged our rhythm a little on these ‘vowel days’. Normally we do our letter verses associated with the letter we are studying in Morning Circle at the beginning of the day. When we were doing the vowels, we left doing these letter verses until after the letter had been presented. The verses we used were a blend of the letter verses from Earth Schooling’s ‘Sixth Sense Language’ program and Oak Meadow’s Kindergarten and Grade 1 letter work. Earth Schooling has some lovely verses that emphasise the various sounds associated with each vowel and Oak Meadow has some great tongue twisters for the letters. Each day we would also do the associated letter activity from Oak Meadow Kindergarten curriculum such as making A’s out of tied bundles of twigs. We also modelled all the vowels out of white medium for our alphabet window. 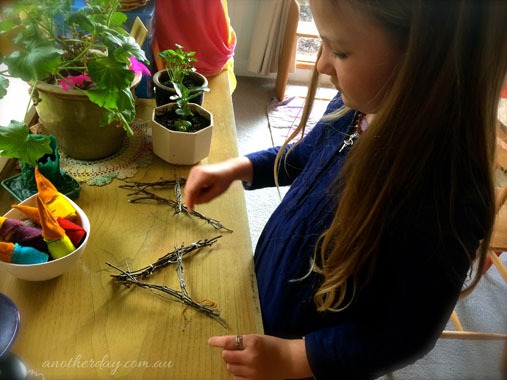 Our Chalkboard drawing would be ready each day for the letter that was going to be presented. The Chalkboard drawing as a base remained the same and was inspired by a Pinterest picture I had seen. I loved the gesture of giving that the angel was in and the hands ‘presenting’ the letter. I adapted the colourings of the angel each day to correspond with the Arch Angel that was presenting that letter. When Chilli copied the drawing and letter into her book, we wrote a sentence that emphasised the vowel from that angel and ideally both the long and short vowel sounds.

As an overview – here is how we presented the vowels;

In my opinion, leaving the vowels until last, presenting them in a reverent way and exploring them in ways that differ slightly to how the consonants were brought – all help to bring that necessary ‘specialness’ to these 5 letters. 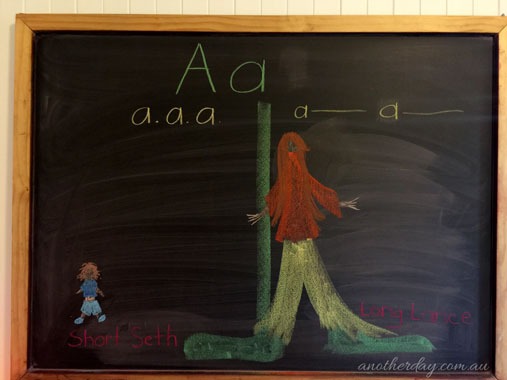 After leaving the vowels to ‘sleep’ for a little while now – we have started to spend a little more in-depth time with the various sounds each vowel makes. We have explored these through the ‘long and short vowel sounds’ lessons that are in the Oak Meadow Grade 1 program. I told Chilli a short, simple story along these lines; Because there is always a child somewhere in the world learning their letters (I spoke about friends who had learnt letters before her, then when she was learning her letters and now friends that were still learning their letters and would soon learn the angel letters) … Well, the Arch Angels are so busy going around taking their letters and stories to all these children, that they need to have helpers that look after the sounds of the letters. Sure, the angels when they first present the vowels, give the children the Heavenly sounds that come with the letters, but of course the children need to practice the different ‘long’ and ‘short’ sounds that each angel letter makes, so the angels have helpers… 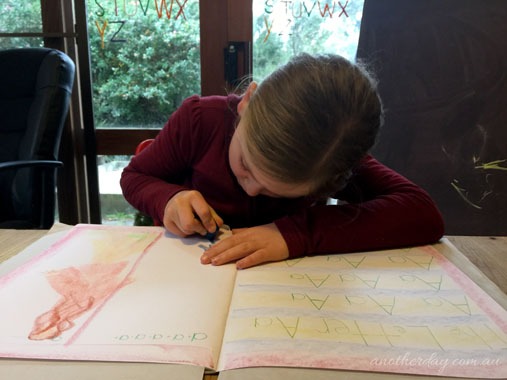 Long Lance looks after the long vowel sounds and Short Seth (who we thought later probably should have been called Shawn for a better rhyme!) looks after the short vowel sounds. We drew a picture of each helper – everything about Lance was long, his; hair, body, legs, arms, feet, shirt, sleeves, pants even his finger nails (I had a bit of a Struwwelpeter image in my mind!) But Seth, well everything about him was short; he is short, his feet are short, he has short arms, short hair, even his shirt is short! We explored the short a.a.a. and the long a—— a—– sound and then I read some words (a mix up of the suggested long/short ‘A’ sound words in the Oak Meadow curriculum) and Chilli told me whether it was a long or short ‘A’ sound. I made sure to focus in the beginning on really pronouncing the ‘A’ sounds well as long or short to emphasise that aspect for her, but by the end she just knew these sounds so well amongst the words I didn’t have to emphasise much if at all. After that she thought up 5 words that either had the long/short ‘A’ sound at the beginning or within the word. I was really surprised at how well she did with this and her understanding of these sounds. We’re still currently working through each vowel in this way with these lessons from Long Lance and Short Seth. 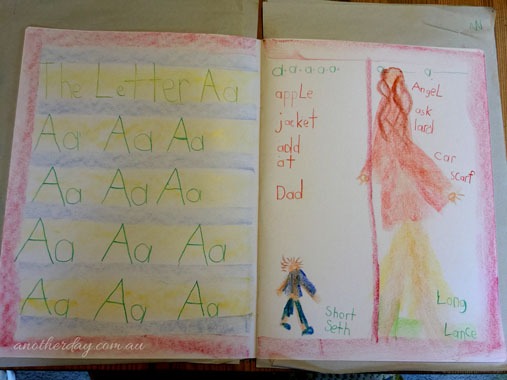 How have you made these 5 vowel letters ‘special’ in your homeschooling journey?