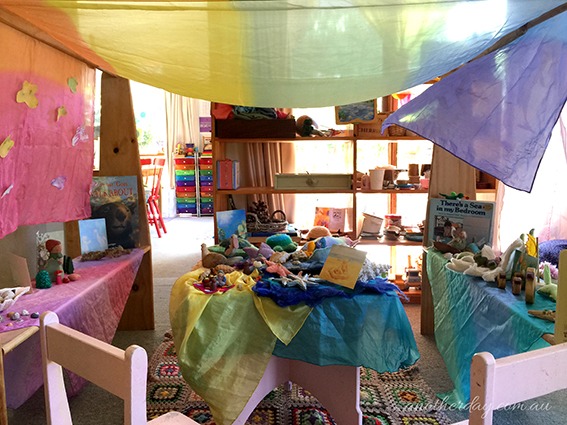 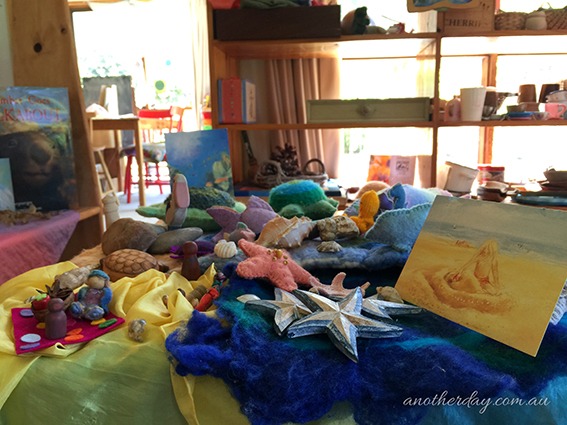 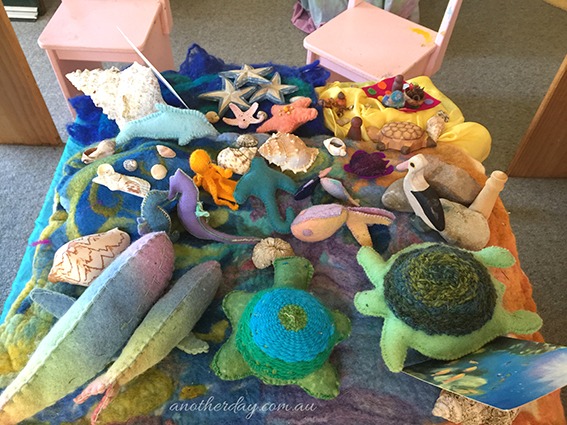 When Chilli was Marlin’s age, I would have the seasons ‘arrive’ by setting up an enchanting scene with the toys of the season that were ‘coming to play’. Marlin is now at a lovely age to enjoy similar ‘invitation to play’ creations and so I’ve been making a mindful effort to create these special little scenes for him. On the first of December, I set up a little ‘Summer Cave’ for the children to discover. I used the two play stands either side of their ‘Pumpkin House’ table and covered across the ‘roof’ with silkscapes. The centre table had a sea scene on it and around on the ledges of the play stands were various little ‘Summer scenes’ with some of their Summer books. 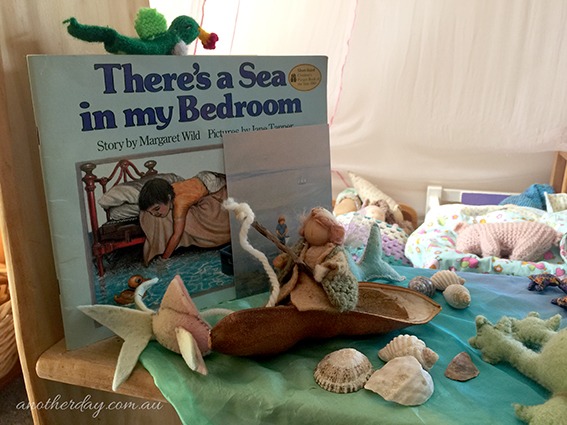 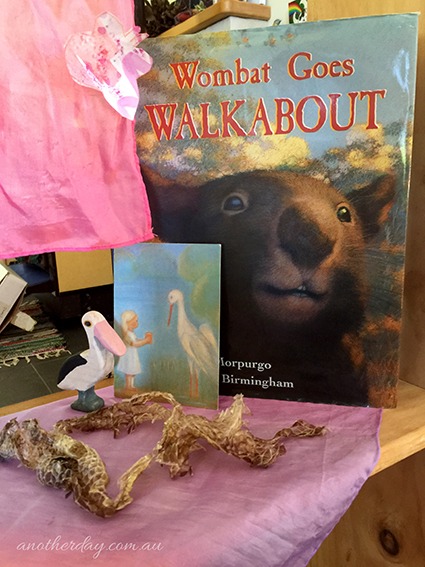 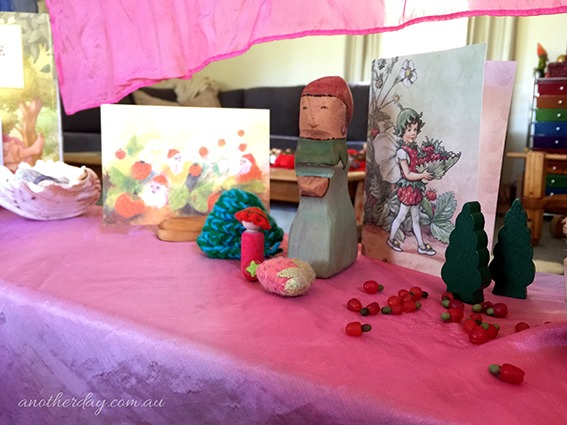 I covered the front in another silkscape and invited the children into the space. They sat in front of the ‘cave’ and Marlin’s marionette doll came to tell him about the turning of the seasons. The silkscape then came down and the children could go in to explore. The thing that captivated them most? A pile of native cherries placed in front of the Strawberry Lady! My food loving children – always ‘starving’ apparently! 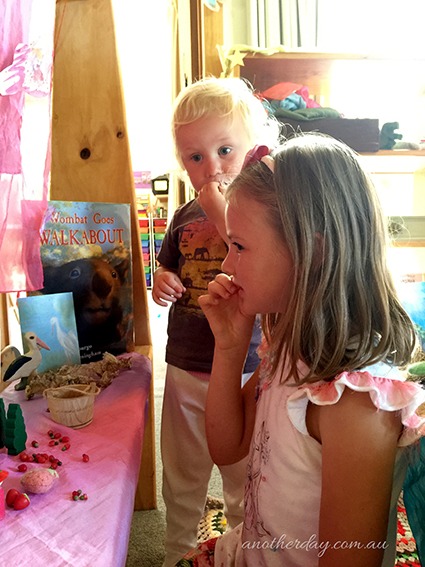 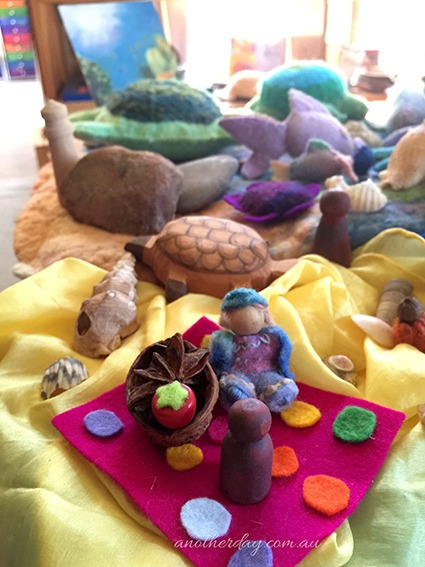 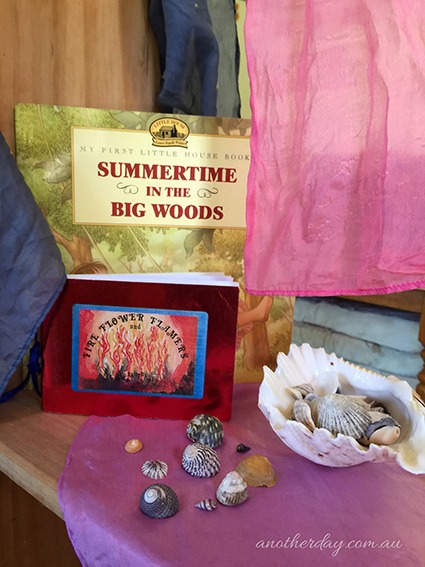 Along with Summer arriving, so did our December crystal – Pearl. These little pearls that we are using for our focus this month are quite special. They are the few left over pearl beads from the strings my Aunt hand stitched onto the bodice of my wedding dress. They are so beautiful in their appearance and their meaning, as well as the properties they hold. Pearls are omens of happy relationships and love. Quite nice to have worn them on my wedding day, especially when each one was loving hand stitched on by my dear Aunt. 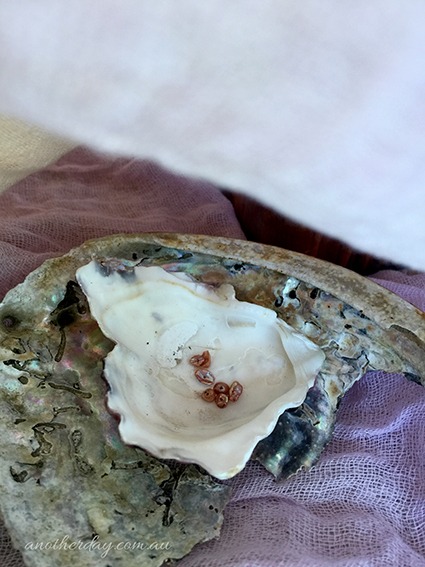 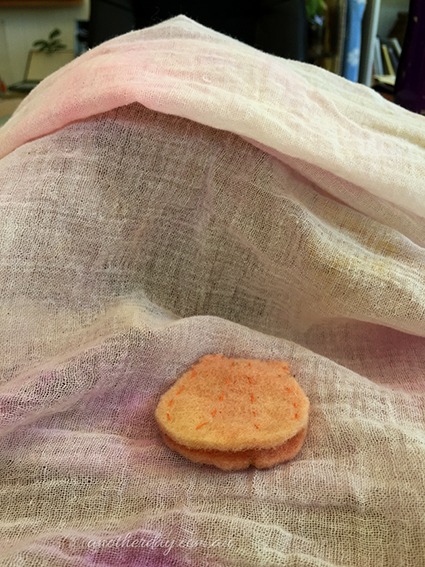 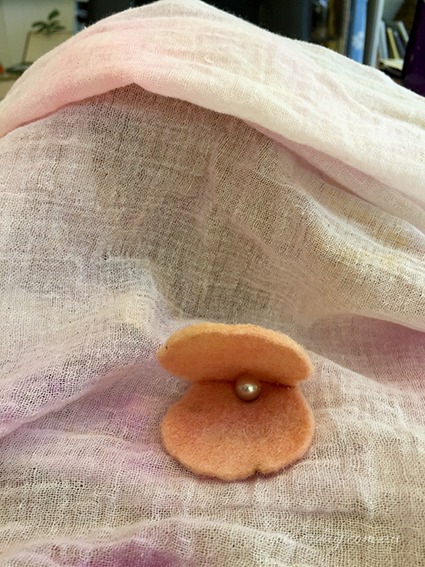 The angel of pearl is Archangel Gabrielle – so for us here in our Summer Christmas it is quite lovely to be able to weave in the story of this angel, through this way to bring our seasons and the season of Christmas together. 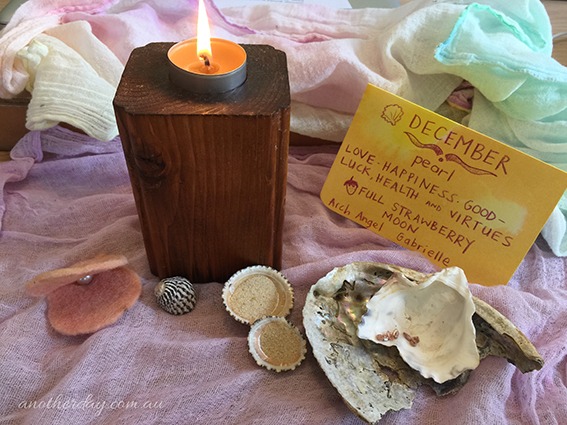 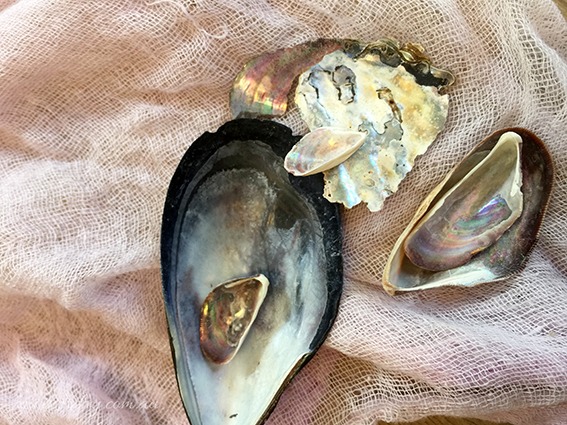 I started out by giving the children a small shell filled with about 1/2t of golden sand we have from a recent holiday to where beaches have real sand! We spread out a little sprinkle on the table and then I asked them to pick up just one grain of sand on the tip of their finger. They both marvelled at how tiny it was and how many grains were in that little pile they’d sprinkled across the table. We then spoke about how that one tiny grain would feel in the big wide ocean and how many grains of sand they think are on a beach and on the ocean floor. They were in awe – and so was I as we spoke together about it. It’s also a really nice way to creatively talk about that Nine Year Change that is starting to stir within Chilli – the awareness of one tiny being which she is, in such a vast, wide world. 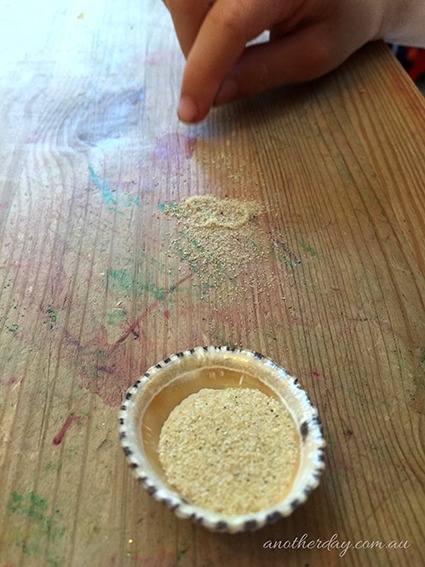 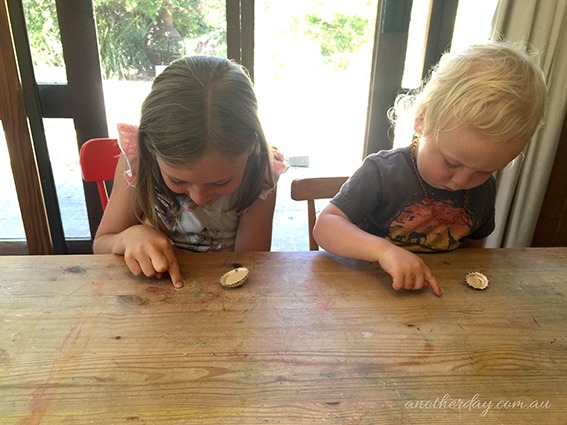 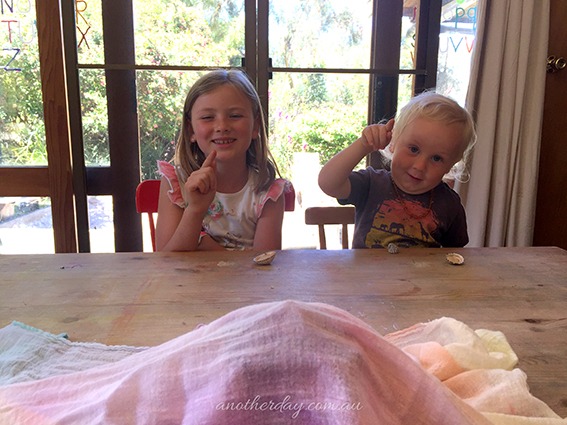 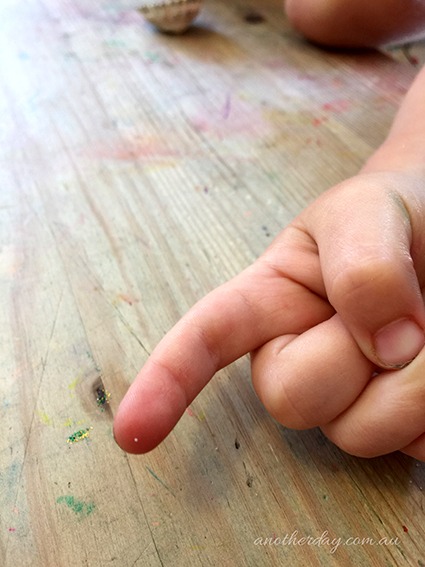 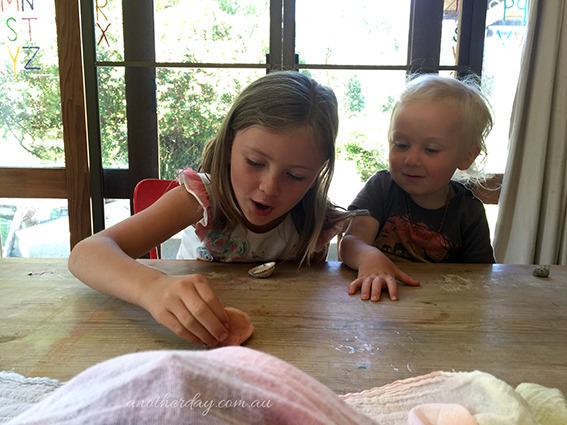 Here is a simple, short story I wrote to bring this month’s crystal to the children.

:: A Cosy Home for Sand Friend ::
Written by Elke at Another Day

The ocean can be a wild and busy place. Beautiful fish, seals, whales and seahorses – corals, seaweeds, algae and moss – molluscs, oysters, muscles and prawns – selkies and mermaids .. They all dance around – and hence the world of the underwaters can be quite frantic.

All of the little sand children gather together to keep each other safe and protected from all this hustle and bustle.

Well once upon a time, there was a tiny grain of sand who was altogether a very shy little friend. Right from the beginning of her days she’d snuggled waaaaayyyy down, deep under all her other sand brothers and sisters. But then one day, it was quite busy on the shores of the ocean. Father sun was shining closer to Sand Friend’s side of the world and there was so much activity around the ocean. Things were being splashed about, stirred up and swam through. Sand Friend smelt a sweet scent coming into the ocean from above on the shore – mmmmm “strawberries” she thought – she always liked how sweet they smelt in the Summer when the children ate them in their picnics at the beach. She always thought how happy the children sounded as they ate those strawberries. She knew they must have been a healthy snack for the children. One day she’d even heard the sounds of two people being married up on the beach. They had strawberries dipped in chocolate at the party on the beach that day. Her friend the mermaid had told her all about those when she came back down into the ocean from swimming around amongst the rocks, watching all the marvellous dancing at the party.

Well, somehow in a big hustle and bustle that happened this particular day, on the eve of the full moon – in a whirlwind of passing sea traffic – the current swirled up our little shy Sand Friend. Well, she was quite frazzled, all a-fuss trying to find somewhere to hide – all on her own she floated, turned, twirled and spun being danced all around in the current of the ocean. Sand Friend didn’t like this at all! She was quite unsure… She looked here, there and everywhere. Tears began to well in her eyes and just as she was about to call out ‘heeeelllpppp please – someone’ …. she landed; floating – softly, gently, down to rest in a beautiful, dimly lit little cave….

Whenever Sand Friend would stir – the kind voice would wrap another veil of softness around her. One day when Sand Friend woke up, she found that there was a wonderful new friend all soft and shimmery cuddling her. Such soft, beautiful arms she had wrapped around Sand Friend. “Hello, I am a friend of the Great Mother – she’s sent me to keep you safe.” “The Great Mother?” asked Sand Friend. “Yes, our Great Mother” said the new friend “my name is Pearl and Mother has said we can stay together forever. I am going to wrap around you and protect you, cuddled in my silky arms. For Mother tells me how scared you get out in that big wide seaworld.” “I do” replied Sand Friend “Thank you” she whispered again as she sank back into a cosy sleep.

And so it was that the two little ones – Sand and Pearl, became the very best of friends. From that day onward they were together always and they became so entwined with each other that the Great Mother whose home they lived in, just started to refer to them as one name ‘Nacre’ she would call them, she said it meant “Mother-of-Pearl”, which didn’t really seem to make much sense because she was in fact the Mother of Pearl – but the two friends didn’t complain, they loved their cosy little home so much and the kind voice was forever gentle and loving with them. They just stayed together, cosy as anything – snug as a bug in a rug and anyone who passed by did marvel at how beautiful and shiny the new friends were together.

What are your favourite ways to have the seasons ‘arrive’ in your home? 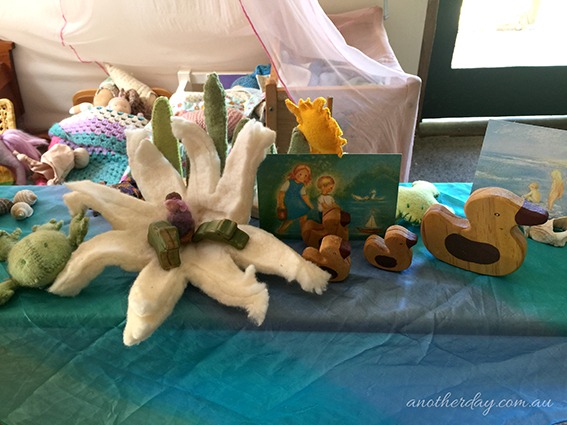 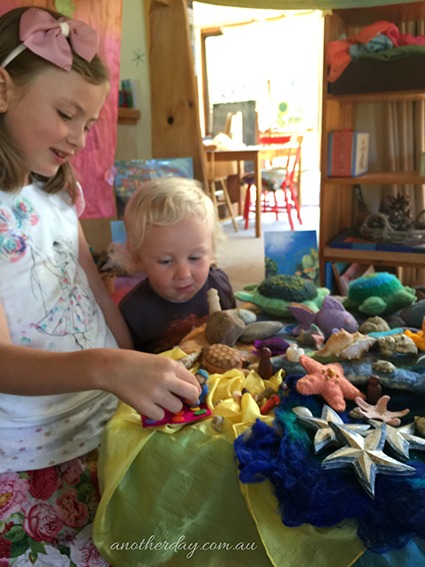 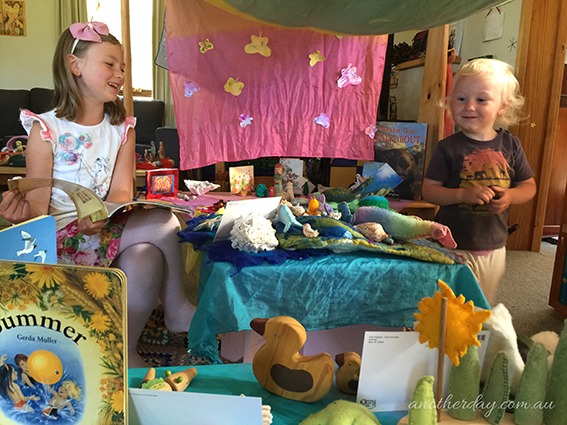 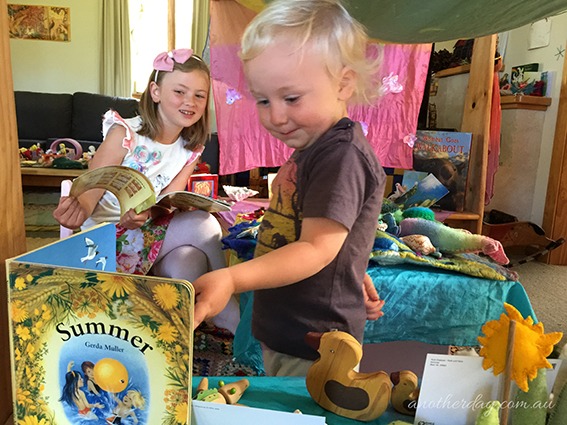 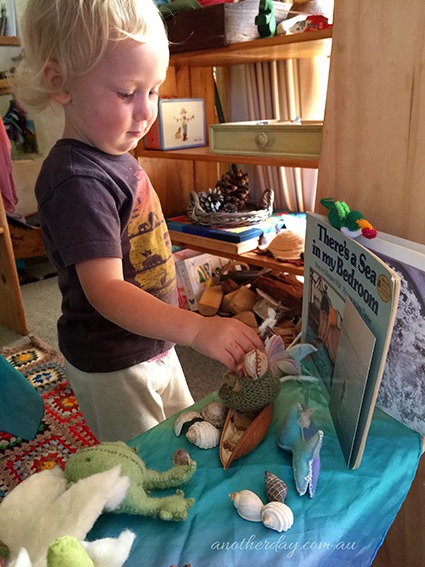 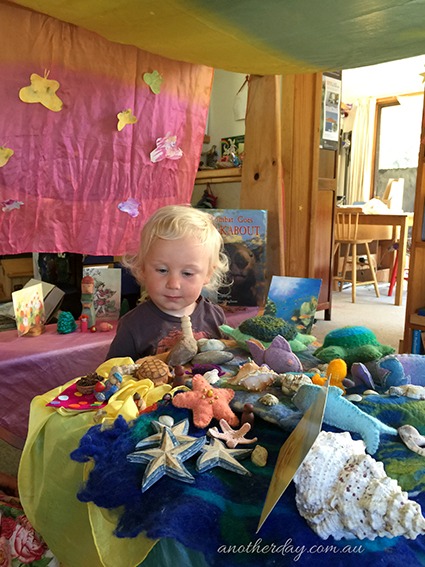 Happy Summer – or Winter, depending on which side of the world you dwell in….